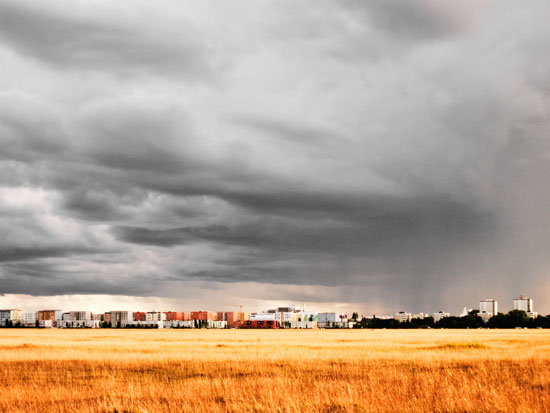 Darius Himes takes issue (here) with a comment that I made some time ago (here) on his excellent interview with Stephen Shore, and Shore’s convincing reasoning why he used large format cameras. My response to the specific argument Shore made in that interview was that, today, he could use a high resolution digital camera of considerable smaller format just as well to achieve the same *effect* – namely an abundance of detail in small, remote subjects. Himes in his rebuttal makes three somewhat different claims that seem trivially true: That (1) the physical activity of schlepping around a large format camera vs. carrying a smaller, less complicated one, affects the way we choose which images we make, and the thought process that goes into making them. That (2) “the methodical precision required by 8×10 […] leads to a methodical precision on a mental level”. And, (3), that “thinking in color or black and white […] affects the way one works.”

Ten years ago, I might have wholeheartedly agreed with all three of Himes’ points. Back then, the demand of making *advance* choices about which camera I took with me, which film I used, and so on, at times drove me up the wall. Strangely, however, Himes’ comments sound as if he thought exclusively of the challenges of the past, and applied them to the use of more current gear. Today, in my experience, such advance choices play a much smaller role. However, a different kind of complexity of thought has come up: the task today is to be able to walk around and see at the same time black and white *and* color photos, large scale *and* small scale photos, and so on. I know a writer who is able to fluently produce English, Greek, and French script with one and the same standard U.S. computer keyboard, switching between the different typesets from memory. Every normal person would say that’s impossible, or at least that it is barely practical. But the fact is, it is possible to use one device for several tasks – or rather, it is possible to do so for those who have wrapped their minds around doing so. Applied to cameras: the convenience of falling into the mind-set of your camera, once you are out, is less justifiable in the digital age than ever before. Or, if you want it (perhaps because you are still attached to this from the olden days, and think that this is the only way to see images), it is a deliberate convenience: you have to ‘interpret’ your digital gear, and intentionally see “with” it one way or another. But again, it is not your camera anymore that forces you to do that: The resolution effect Shore talks about can be achieved with pretty humble devices today.

Himes claims that “the methodical precision required by 8×10 […] leads to a methodical precision on a mental level”. This reminds me of the old adage, created by Ansel Adams, that there is nothing worse than a sharp photo of a fuzzy concept. When I think of methodical precision, I think of Cartier-Bresson (who used one of the smallest formats available to him, and probably disliked the term “method”). “Methodical precision,” like constantly going for the “decisive moment” and creating a whole new aesthetic from that approach, is a brain thing *first*, and, no matter what Leica (the company) tells you, a camera thing *second*. If anything, my experience with cameras is that the more pedestrian they are, the harder you have to work to get a strong image, and the end result often benefits from that. But either way, let’s not mix up method in operating the camera, and method in creating an image. The latter includes the entire process, from idea to final print (or any other choice of display). There are many choices involved in that, choices that more than at any time in the history of the medium “photographers” can make for themselves. The classic distinctions that were so familiar in the analog age pale in comparison.

One thing has not changed though it seems, irrespective of the gear you use: You have to have a convincing concept of what you do before you get up in the morning – and to come up with that takes much longer than the 40 minutes or so to set up a large format camera. In that sense, I believe, gear was, and is, a secondary consideration. The image above is from earlier this week. Not to mock Himes’ own words, but: “The way light reacts with film and chemistry is also different than the way light is registered digitally on sensors.” Aha! So was it film? Was it digital? Large format? Small format? Camera phone? Tripod or not? Photoshopped, or straight from the camera/scanner? Did the camera have a touch screen interface, or old fashioned buttons and wheels? Did it take an hour to set the camera up, or two seconds? To me, the image has a couple of flaws (I am not sure yet, it’s too new), but the choice of gear has very little to do with them.