I find it interesting what gallery owners think will work on the walls of their clients. After all, this is a highly commercial business. Once the buyer has realized that the large format print of the toothless mouth of some artists’ grandmother looks so 1994—especially when the image was made in 2005—this buyer may not come back. Then perhaps rather the corpse of the Taliban fighter? Or would you rather not have it in your living room, now that there are newer wars, with a different aesthetic, and Uptown dinner conversations have moved on to new topics? Photojournalism, albeit often a lot more relevant and substantial than the results of the self-exploratory approach, seems to remain an odd bet in the art gallery venue, even with the current spike of war and conflict as a “cultural phenomenon”. And of course photojournalism has made its entrance into the art galleries mainly because many traditional outlets for photojournalism are now practically extinct, and not because there was a genuine market for photojournalism in the art world in the first place. 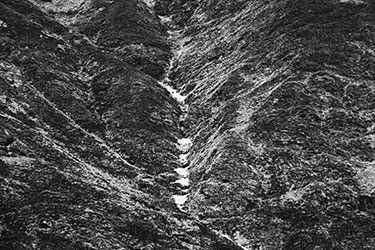 I have my own views on what makes sense to be hanged on a wall. And, although naive, self-absorbed art is not likely to go away, I like that some people have started to question its current dominance. I certainly don’t want to make a case here for some grandiose “high art”, which I think is dead for good. Rather for a stance along the lines of American low-life writer Charles Bukowski, that “[good] fiction is an improvement on life”. For example, the impact that can be created by an almost archaeological project in the streets of New York City works for me. I prefer it to a series of photos of what my distant aunt in some provincial village looks like in her absurd living-room (I’d also prefer a Rothko to a e.g. Picasso’s Guernica in my own surroundings). If this makes me superficial, superficial is exactly what I want to be! But Chelsea gallery owners beware: I’ve been showing around business people from Europe in your places quite a bit, people with a keen interest in the arts and substantial amounts of money to spend, and I’m continually amazed about how alert to any sort of self-referential art gallery drivel these kinds of buyers are. Maybe it is the curse (and the hope) of the art world that it has become very commercialized, and now has to deal with a very astute business clientele on *their* turf. 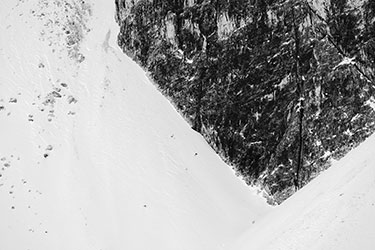 The stern images from the new series from the Alps are very closely related to my Manhattan Project. Obviously it is another “surface” project with, I hope, some depth to it. The scale is vastly different: I’d say that, on average, I’m 500 to 1000 times closer to the subject in the Manhattan Project, compared to this latest series. But visually I find the results strikingly similar (I am of course someone who also is fascinated by the fact that the smallest particles seen through an electron microscope and the largest clusters of stars seen through the biggest telescope can look strikingly similar). Both series are made from images of subjects that combine many layers of time in one single surface. Both series make references to modern painters that I like (by “modern” I mean 20th century). And both series work well if hanged on a wall. Before I proceed with a project, I always show early samples to people I know well and who I trust enough that, if they shot a project down, I wouldn’t hang on to it. This one is being greeted with enthusiasm, and one viewer of the first large format prints from it summed it up for me: “I want to build a giant house where I can live with these prints around me”. That’s how I see these myself, and that’s of course the only thing that counts for me anyway: After all, this is not business, this is personal. 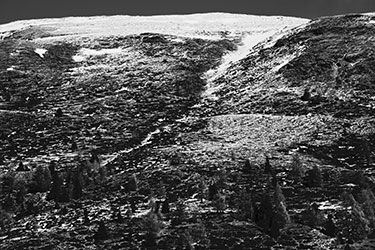 Image galleries displaying the current status of The Mountain Project and The Manhattan Project are here, and two movies here. The inevitable Nietzschean e-card, amongst others, here.