The following article from the BBC news site––about pig farming, murder, and disposing of bodies––seems like a great (albeit somewhat sickening) read in its own right. But somehow the story also reminded me of the current art gallery lingo that distinguishes between pure “artists working in a lens based medium” (even if they drive to their shoots in Ferraris) and others who dirty their hands and stain their souls with “commercial” [sic] photography. It may not be immediately apparent what triggers recollection here, and admittedly, the various analogies which I have in mind are somewhat vague. When in the classic movie Harry describes his and Sally’s newly difficult relationship––friends becoming lovers, remember––with reference to the aging of dogs, she understandably asks ‘And who’s supposed to be the dog in this scenario?’ Along these lines, you might wonder, who in the world of photographers and gallery owners is supposed to be the pig farmer and the mass murderer? The chain of associations must remain vague. But one thing seems clear: The artist-photographer who turns out to have done commercial work is like the killer who buried his bodies, and let’s hope it was less than 50 commercial jobs he did! Or, alternatively, let’s hope that he doesn’t get sloppy at the end, so that the bodies never turn up. 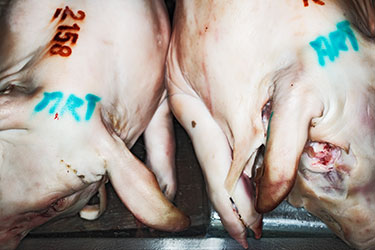 Hence, again, a disclaimer: I do not quote the following piece here because of a newfound interest in agriculture––certainly not in the literal sense. From the BBC news section, Pig Farmer ‘Planned More Murders’:

“Canadian murder suspect Robert Pickton admitted he had killed 49 women and eventually wanted to murder 75, an undercover policeman has testified.

Mr Pickton is alleged to have made the comments in a prison cell conversation with the agent after his 2002 arrest. The 57-year-old pig farmer is accused of murdering 26 women – all prostitutes and drug addicts – who disappeared over a period of more than a decade. He is initially being tried for six murders. He has pleaded not guilty.

The undercover officer, who cannot be named in accordance with a court order, was testifying before the jury was played a videotape of the secretly filmed conversation. He says he won Mr Pickton’s confidence when he shared a cell with him in February 2002, posing as a man facing attempted murder charges.

The officer told the court that Mr Pickton indicated first with hand gestures that he had killed 49 women and wanted to kill one more – holding up five digits and making a zero with his other hand. At that point the officer allegedly asked “50?” and Mr Pickton replied: “I was going to do one more – make it an even 50.” The officer said Mr Pickton later told him that once he reached a total of 50 victims he planned to take a break then kill another 25.

The officer testified that when the pig farmer returned to his cell after 11 hours of police interrogation, Mr Pickton boasted that he had killed more people than US killer Gary Ridgeway, the so-called Green River killer – who in 2003 admitted killing 48 prostitutes. “They never seen anything like this before,” Mr Pickton said, adding that he was “bigger than the Green River”. The officer testified that Mr Pickton said “his only problem was that he got sloppy at the end”.

Mr Pickton was also accused of indicating that he had used a meat rendering plant to dispose of some of the bodies. The officer said he suggested that the sea was a good place to dispose of a body. “I did better than that,” Mr Pickton allegedly responded. “Rendering plant.”

Prosecutors say Mr Pickton butchered the women after he killed them and disposed of the remains on his pig farm outside Vancouver. Police investigators spent months sifting through the farm collecting evidence. During their opening statements prosecuting lawyers said the police believed he got rid of the women’s bodies by feeding them to his pigs.

A judge decided to split the case in two because the volume of forensic evidence collected from Mr Pickton’s pig farm could have overwhelmed the jury.”