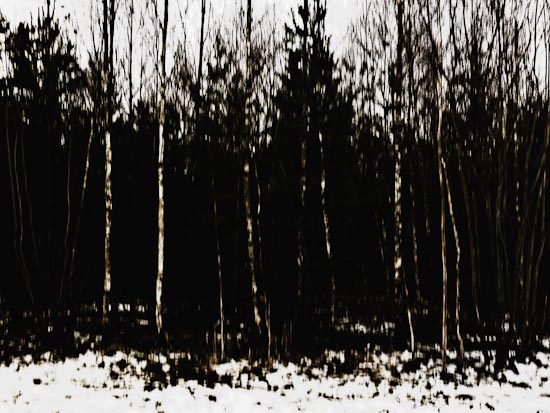 I’m so pleased that you selected two of my images for your office. Will this make up for some of the missed appointments? I can only hope.

I just sent the files to the printer, so you should have the prints — assuming JFK won’t shut down again due to the weather — less than two weeks from now.

You chose two of the gloomiest images from the whole forest/tree series. How come? Obviously, I’m flattered, because I like these images myself. In my experience, people don’t usually get ‘gloomy,’ except of course when they mix up ‘arty’ and ‘gloomy.’ ‘Good gloomy’ seems underrated. But what do I care about that when I contemplate your choice.

Right now I’m looking out the window at the ice storm. Five minutes ago a large pile of ice broke off from the roof and crashed into the yard. It could have killed a grown man easily, and reminded me of avalanches in the Dolomites, the ones later in the winter when the melting snow turns into ice. Down on the street, a car has been parked at an odd angle all morning, blocking half of the street. Apparently the driver just gave up and left it there.

I will see you soon.