I should follow up, somewhat belatedly, on my earlier entry on grocery shopping in Berlin. A store called Frischeparadies (“paradise of freshness”) seems to be a favorite among the more ambitious chefs in Berlin. Frischeparadis caters to restaurants, but is open to the general public. I surveyed everything, though I couldn’t buy much, because my temporary apartment in Berlin has a mini-stove with two burners, no freezer, and no oven. No complicated recipes for me right now! There is no meat counter with people to serve you, and only a relatively small choice of fruit and vegetables. But there is friendly staff at the fish counter (where I tried a couple of shrimp), a selection of wine that I didn’t study too closely, a great choice of cheeses, raviolis, gnocchi, and so on, and fabulous meat in the shelves. 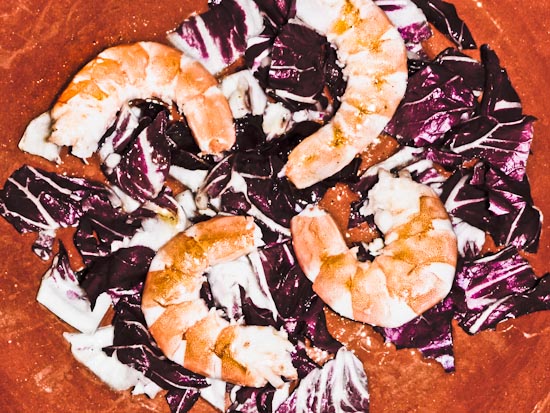 Most of the offerings come in sizable packages, suitable for restaurants or a dinner with lots of friends. One of the few things that could plausibly be bought by a solitary architect-chef like me was a small package with two pieces of guinea fowl, imported from France (“pintarde,” for those who prefer French).

The quality of the meat was outstanding. One didn’t need any skill or tricks to make it into a perfect dish. I just put it into a pan with hot olive oil, added a couple of scallions, and once it had a nice crust, I added some white wine and tomato. People who live in Berlin must have their freezers filled with supplies from Frischeparadies! It gets my highest recommendation, five stars. *****