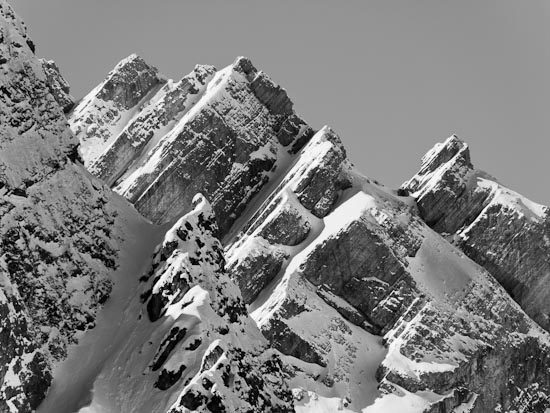 Last night, I had my little Death-In-Venice moment. This is the time of year when the summits of the Dolomites are perhaps at their most beautiful, with lots of snow and all that strong spring sun. The views are so stunning that only later in the day, when large avalanches of wet snow start to come roaring down from the southern slopes, the dangers of all this are obvious even to the most uninformed tourist. Yesterday, there were a total of three avalanches near our path; one had directly crossed it the day before. Inspecting the remains of such a thing is disconcerting: getting caught must feel like the equivalent of getting drowned under wet cement (which then freezes all over into once incredibly dense block of ice once the sun goes down).

So last night I told one of the hotel staff whom I’ve known for years about the day’s tour, and he looked at me as if I was a mad person. Earlier in the week, he told me, four people had died in an avalanche on the mountain right next to the one we had climbed. But overall the locals don’t really talk about these things in front of guests, like they don’t talk about the cholera outbreak in Thomas Mann’s novella. I think in the mountains this makes sense: if you don’t want to close off the Alps entirely, you have to trust that the people who go there know what they do and make responsible assessments — yesterday, this meant to re-consider which way to go, which slope to cross, every 300 feet or so.