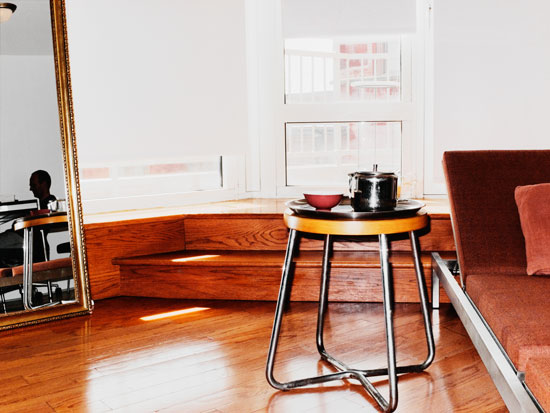 Another shot from Jens’ new apartment. This time, I was allowed to take the photo, albeit not without instruction. I wanted Jens in the picture (he’s the almost invisible shadow in the mirror). But of course, he ‘directed’ the picture. I felt like a rather sophisticated computer, who can follow all kinds of commands.

So, this is what part of his living room looks like. He bought a rather beautiful Case Study Chaise from Modernica, one of my much liked brands for simple modern classics. You see some of it, in Linen Chili on the right. He also has some original steel stools from the 1930ies. The one in the photo, however, has been badly messed up by someone who tried to repair the wooden seat. Most deplorable. So now the seat has to be covered up. You see the stool in a large mirror, and some of the tea utensils I used to make myself comfortable.