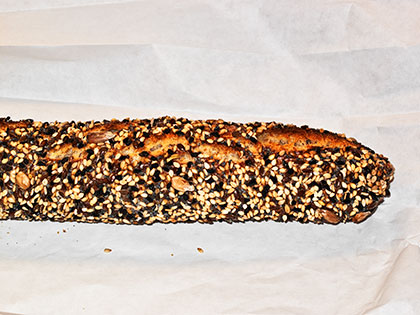 Jens moved to a new apartment, and I finally made it to his new neighborhood. And I have things to report. But first: I am thinking of changing the tone of my entries to Jens’ blog. When I first started writing about surviving New York’s food on Notes From Nowhere, I was new here, and in despair about the absence of all kinds of European delicacies. I still miss some things, but some strange transition took place, and I can’t be quite as desperate as I once was. Perhaps I’ve just come to know things so well here that I most basically like them. Thus, I need a new vocation: that of food and restaurant critic. For a start, I’m planning to describe to you every little store and restaurant on the West Side, my territory. A couple of blocks away, it is Jens’ territory.

When I came to see Jens’ beautiful new apartment, he had a little pear tarte, which was in a rather non-descript grey carton. It didn’t bode well, and I was thinking that he had better left it to me to bring something. However, the cake was absolutely perfect, so much so that I asked Jens to show me the place where he bought it: the Silver Moon Bakery at Broadway and 105th Street. This place is a real neighborhood favorite. While you wait in line, you watch the bakers make new things, and it’s clear that this is all fresh, done from real ingredients, and so on. Very reassuring! I bought quite a number of things, with my new task of food critic in mind. My absolute favorite is a fiscelle (that’s a thin, sourdough baguette) with various grains. I came back three times for it already, and only once I was lucky enough to snatch the last one away from the next person in line. Another highlight are the palmiers, again a French classic, a kind of pastry that can be hard and all-too-sugary, or fluffy and melting in your mouth as the Silver Moon Bakery’s palmiers. Various breads are excellent, with a real European feel to them.

Following well-known standards, I shall assign stars, and I’ll give five stars to the best places. The Silver Moon Bakery certainly deserves them. *****