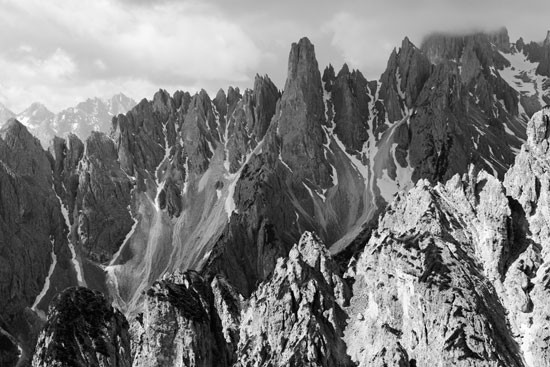 Here’s another new image from my Mountain Project, from this summer. While it’s too editorial for my taste (I wouldn’t hang it on my own wall, which normally is my benchmark for the final edit in any of my personal projects), the image is relevant for the series as a whole: This is how the Dolomites look like in early June, when the weather is changing every other minute and you feel like being confronted with an almost theatrical setting, and constant surprises. Here, in the foreground there’s harsh sunlight, a mile away to the right it is raining, and still farther back there’s this sunny haze that seems to be typical for the Alps at that time of the year. Two minutes later, and the scene would have been quite different yet again.

One more thing: A year ago I complained that if you photograph this kind of scenery with film, you are basically done in one 125th of a second, while with digital you can spend hours in Photoshop to achieve the same result. Not so anymore – digital cameras and software get better quickly, and as a result this one barely took me 15 minutes in post processing, with just very minimal changes re contrast. In a later entry I’ll try and pass on some simple tricks that can spare you a lot of post processing grief.