Believe me, Berlin Mitte (the former East), my home for a long time, is the place of unfashionable fashion – of people who really believe it: That fashion is made on the street, by the young crowd that reinvents itself every day. Perhaps London is a little like that. But right now, these kids run around Berlin. And of course they are artists, what else? So the camera is at hand, and the genuinely cool, fresh, and amusing quasi-fashion shots end up in low-key, underground magazines. All of Berlin, of course, is ‘underground’. So everyone reads it, and there is a real reality for the fashion world outside of the established magazines such as Vogue or “W”. 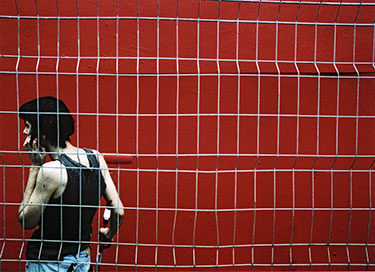 The kids that I have in mind do not inhabit the world of Vogue, not at all. So there is, in fact, no reality to the ‘real world’ of the big fashion magazines. But they have quite as keen a sense for what looks cool as the most sophisticated fashion editor. Maybe more so. Would they show their friends, who populate their photos, in genuinely unbecoming ways? Do they think that they can make fashion without *devoting their life* to inventing these styles? No!

I’m not sure what they would have to say about some adult from the established world of photography doing a watered down version (by not using professional models, make-up, etc.) of what they do on an extremely sophisticated visual level. I guess they would wonder why these adults think that inventing anti-fashion can be done in a week. Rather condescending, they might think. And a little sad, that even the tiniest slice of momentary fame seems to make anyone forget the eternal truth that *whatever you want to do well is going to be difficult*!

So, here’s my little contribution to this week’s photo-debate: Why not have a little respect for those who actually are masters in anti-fashion photography? Why side with the world of Vogue, or “W”, and act like they don’t exist (so that one’s own non-Vogueish photos are, presumably, oh so different)?