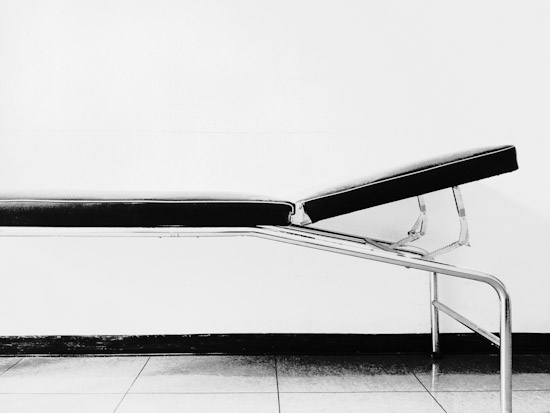 Over the past few months, I’ve been experimenting with image files from the iPhone 4s. I don’t expect Apple to have anything like the insanely good Nokia camera/sensor anytime soon (which I’d probably buy if they got the phone part right…). For the time being, I downloaded just about every camera app ever made for the iPhone. So far, I’ve always come back to Apple’s default app. If they made a few smart tweaks to it, that would go a long way. What’s needed most is more control for the user: the default sharpening and noise reduction are overly aggressive. The iPhone is a consumer device alright, and Apple isn’t known for handing over control about anything. But here’s to hope that the next update will bring a couple of changes.

The image above is from a hospital that’s currently under reconstruction, with broken devices shoved into corners while both construction and the treatment of patients are ongoing. The design of this piece struck me as quite ingenious. There are no superfluous parts whatsoever. The whole thing is simple. Once repaired, it will be super-functional again. Those were the days of good design it seems… 1960s I guess. The light in this scene, at the end of a long corridor, was difficult. I processed the image a couple of times, with and without digital filters, then merged the resulting files into one. The final image almost looks like coal on paper to me, which is what I wanted. It’s suitable, both technically and aesthetically, to be printed large.