forgive me for not writing sooner. I’ve been in transit, moving through a couple of places, and now I’m in Berlin, walking through streets that I know in and out from my early years in photography. At some point, a few days ago, I had to think of the ancient puzzle of the ship that, over its lifetime, has lots of parts replaced – is it still the same ship? 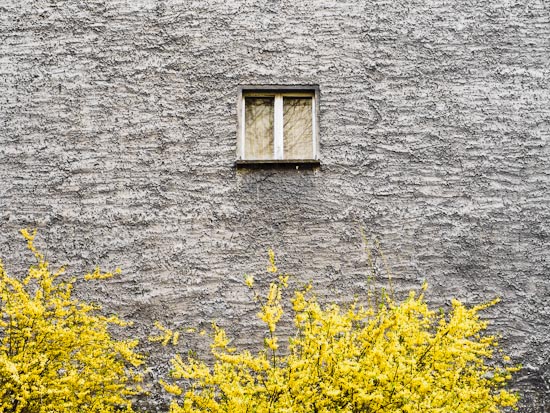 The city has changed quite a bit over the past ten years. Tourism is ugly as everywhere. Parts of the city now look like any other major city in the Western world. Rents are still ridiculously low, and yet construction is crazy (I don’t know according to which economic theory they keep building office space, apartments, “town houses,” and so forth). Twelve years ago, when there were still ruins and “Brachland” galore, I made a series that I called “Berlin Walls” – images of all kinds of walls all over Berlin. I did not make any images of the real “wall.” The project became my first international publication, but eventually the prints got lost. I’m still drawn to Berlin’s walls. At the same time, when I walk around the city now, I ask myself: am I still the same person, or have the past seven years, years I spent mostly abroad, changed me?

My first impression was: damn, I’m still the same – what have I done with these years! Eventually, though, my mood became less bleak. Physically, I feel the same indeed, which I guess is not a bad thing. But when I talk to people, I realize that my years in Manhattan have added a perspective on many things that I did not have before. Whatever the future brings, I guess I have become a lover of America – certainly of its ideals, its subtle nonchalance, and its many unwritten codes that, if applied with skill, can turn into an artform. However, for the time being I’m here. But I needed to send a note to Manhattan, and to you – I know I was supposed to come in, but then all these travels came up.

I’m not sure what to think about the ship, and you, and the question of whether anything remains the same over the years. I visited Berlin a couple of months ago, and found it terribly charming. The large apartments that everyone seems to have, the pre-war houses, the large boulevards. Almost like Paris, with a hint of Moscow. I felt a sense of great familiarity – the strange mix of harshness and liveliness somehow spoke to me. But then, I worry that this may be the view of the outsider. I spoke to some Germans and learnt that Berlin has high unemployment and many social problems. Perhaps I fell victim to a kind of romanticism that one can only afford if one knows one shall leave again. Perhaps your perspective, or what I perceive of it in your photo of the bleak wall, is more realistic than my dreamy conception of Berlin. But I worry about you, as I so often do. Today, however, I find it hard to put my finger on the source of the worry – I guess I feel I might lose you to this other city. What about the spell of Manhattan? I know I shouldn’t write in this personal way. Once I told you not to forget your old friends. Now I want to say: don’t forget your new friends. When you come back, we shall talk about the question of change, and old and new selves.

Until then, try to remember that Manhattan misses its inhabitants when they travel.