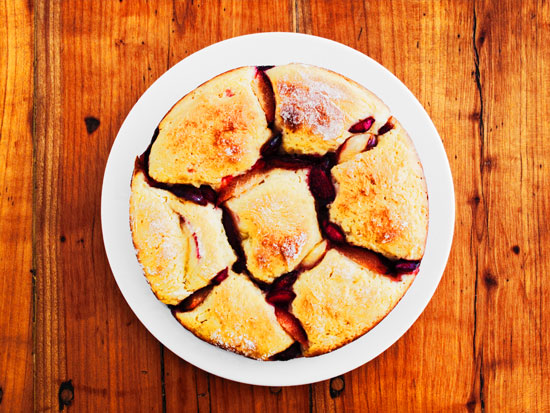 About a year ago, I found some European instant yeast in a New York supermarket. I bought it, almost instinctively. But I never did anything with it, until a few weeks ago.

This summer, I didn’t have time for extensive stays in Italy. So I decided that I needed to make some truly rustic cake that feels like being at home. I bought Italian flour, the brand (here) I use when I’m in Procida. I also researched the web regarding the disputed and presumably unseemly matter of using instant yeast. I found two blogs that I really liked, here and here.

Anyway, here is my super-simple recipe, for the kind of dumplings you eat when skiing in the Italian Alps (it’s called something like “oven pasta”). They are served with lots of sugar and some people like to add butter. But I’m a purist here, and think this is not the kind of cake that is supposed to taste particularly sweet. Rather, it’s a mix of cake and bread, a kind of bread filled with fruit.

You mix a pound (that is, a European pound, which is a bit more than a US pound) of flour with a little envelope of instant yeast. Two glasses of milk on the stove, with a bit of butter and two table spoons of sugar. Mix with the flour-yeast-mix (don’t forget, as always, a tiny bit of salt), plus two eggs. Once it’s all nicely blended together, it has to rise, which takes about an hour in a warm place, protected from any draft.

In the meantime, you’ll need to prepare some fruit. Most fruits are fine, but it’s good if they have some acid. Plums and apricots are the best. Cut it up, add some lemon and a bit of sugar. Once the dough is ready, you make tiny dumplings, filled with fruit, and place them next to each other. Add as much fruit in between the dumplings as you can fit in. While you do it, it feels as if it will be too much. But when you eat it, you’ll love the sweet taste of the fruit. Cover it with a thin layer of sugar, and off into the oven. It takes about an hour, or a little less, at 395 degrees Fahrenheit.