With Steve McQueen (here and here), Fiona Tan (here) and Bruce Nauman (here), Shaun’s (here) is one of four world-class contributions this year. I am conceptually most drawn to his Apology to Roadkill (2007-9) film series. Each is the enactment of a sort of ritual burial of kangaroos killed on the highways of Broken Hill, NSW—though this could be almost anywhere in non-coastal Australia. A motorcyclist in full riding leathers, boots and a helmet, almost cyborg-like, pulls up alongside a kangaroo at the perimeter of the road. He bends down to inspect the body, he waves away flies. He takes hold under the back legs and neck, and circles the road with the body in his arms, an embrace. In one enactment, he struggles under the weight of a large male and has to fortify his grip; in another, he marks the ground, criss-cross, with a heavy boot.

The movement is set against a strip of highway receding vertically into the horizon, the redness archetypical of the Australian earth. The heat ripples up and out of the bitumen to mirage-like effect. Three-time heavy vehicles hurtle through the space like monsters; they are made creaturely by what look like eyes on their windscreens; they seem to be just another species of animal. The rider, on the other hand, while he stands to the kangaroo as a fellow, while his gesture is one of fellowship, is unlike the others for he can atone. 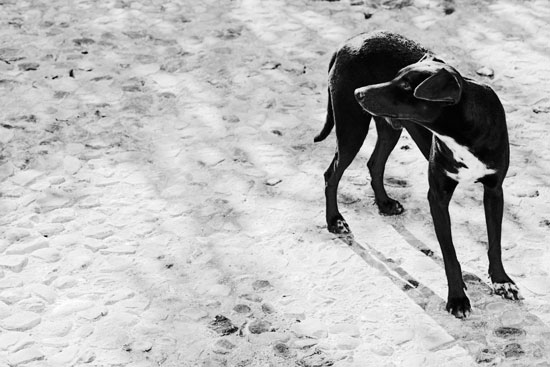 In the afternoon we visit a series of pavilions in quick succession; they serve mainly to remind us how difficult it is to make good art—good anything. Egypt brings us woven pussy-cats arranged semi-circularly around a mummy, in a kind of paean. Poland professes loud interest in ‘otherness’ and ‘marginality;’ Austria is degenerate with finger-paintings of genitalia; Italy does not distinguish itself from the pedlars of blown-glass in every second shop along the canal.

But, credentials notwithstanding, Liam Gillick’s (here) is the most conspicuous failure. He has fitted the German Pavilion (English born, Germany chose him as its representative) with a mock-up of his daily workspace; stripped to bare pine, it resembles an Ikea showroom prior to install. The work’s orienting question, as the accompanying handout explains, is ‘Who speaks? To whom and with what authority?’. While there may be interesting problems in the neighbourhood—the authority of testimony, for example—Gillick’s question is undeveloped and courts a dismissive: You can speak to whomever you like!

Now in the course of asking himself the question about speech, Gillick found he was interrupted by a household cat. And the record of that exchange survives in the body of an ‘animatronic’ cat sat astride the workspace cabinets (the cat has the authority to speak, to Gillick!). The muddle here is akin to confusing honesty with full disclosure (the integrity of an artistic process with the chatter in the artist’s head). And despite the accompanying commentary, I am not sure how to tie together the ‘applied modernism’ of the cabinet interiors, the ill-posed question about discursive authority and, yes, the talking cat.