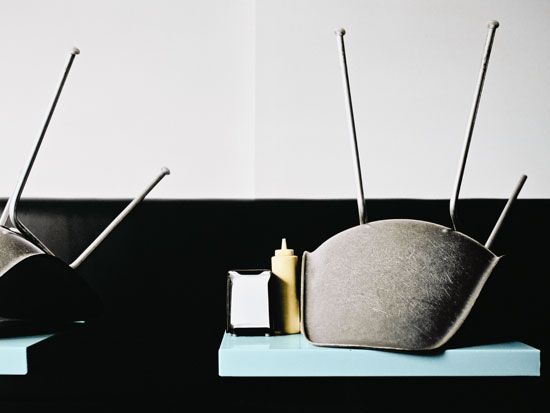 Many years ago I saw a documentary on Magnum and/or Sebastia Salgado. He just came back from China. The trip apparently had not gone so well. Still, his way to do the edit was to have a plethora of images printed in postcard size, and then flip through many stacks of them with a colleague at Magnum. I remember that it made quite an impression on me, both because it seemed so dedicated, and somewhat wasteful at the same time.

A recent post picked up on the subject of editing again (here, via here), and I was astonished to see that barely anybody of those sampled seems to use a computer to do this. Contact sheets and rush printing galore for the task of editing, in 2008?

Some of my day jobs have been as an editor. During that time, I’ve worked with hundreds of photographers and hardly anybody was a good editor of his/her own work (but the best ones were very close). So I’m familiar with the phenomenon that it is very hard to judge something that you are close to on an emotional level.

Here’s how I work. First, at this point I am very focussed on a number of specific projects, so there’s a huge element of editing right there, even before I grab the camera – I simply do not make pictures of many things in the first place because they don’t fit into any of my current projects. Second, working digitally, I edit while taking pictures already; somehow, useless images on the memory card bother me. Usually, even without the camera screen, experience tells me when a subject only needs two or three frames to get it right, or ten or fifteen in other cases.

Those files that are close to what I wanted go into a “new images”-folder on my computer. If I think the edit is going to be difficult, I let them sit there for a while. I then select the best image from each series of a given subject; this I *never* do alone. When it comes to software for this step: right now my choice is Adobe Bridge. The selects go into an archive folder and from there get their Photoshop-treatment – nothing fancy, basically the same things you’d do in the darkroom.

The final edit happens gradually, by looking at the files in different environments at different times – sometimes on this blog, on my iPod (touch) while riding the subway, on different screens at different sizes, side by side with similar subjects, or by themselves. At the end of all this, there will be a couple of surviving images every year that can stand on their own. As to projects/series, that is a somewhat different game, because images become relevant that are not working as singles. But for both purposes, I’m very happy that I can do all this electronically (useless prints bother me…).

As to the editing for specific purposes such as a book, this will involve the verdicts of others again. Sometimes, when I feel that I’ve worked with the images too much during the several stages of editing, I’ll ask someone else to do the sequencing for a slideshow or a book, and work from that suggestion. In other words: While like everybody else I rely on the subjective element, I also feel I know its traps, and try to sidestep them. Now, there’s also subjectivity in whom we listen to, very true! But then, there are surprises in who has what to say, and I quite like these surprises.