I’ve gone digital in 2002, so like almost everybody else I have to make up my mind: what to do with all those images from the time before that? One project that I did back then, which fell victim to giving up film, was a ‘dog project’ that I had just started in 2001. Digital so far just hasn’t been that suitable for true point and shoot photography, at least not when compared to the forgiveness of color negative film. This is only now starting to change, with cameras like the Canon 40D (more on my latest camera choices here).

The good news is that, with almost everybody using a digital camera now, demand for the scanning of film has gone down quite a bit. Hence one can rent entire scan stations, including a high end Imacon scanner, a computer and a professional monitor, for relatively little money. Plus, the increasingly sophisticated Photoshop plugins that originally were made to remove noise from digital cameras can be used for correcting digital artifacts in scans as well. Even scans from color negative film, which has been notoriously ill suited for high end scanning, can be made to look really nice now. 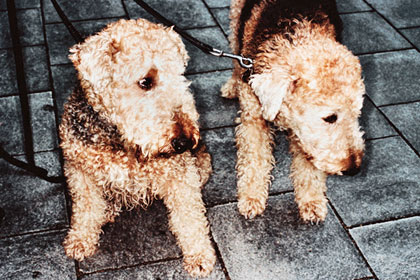 So, the remaining question for me is this: do I really want to look at my old work? Some of it seems pretty lame to me today. And even those images that I kind of like, such as these two, feel a little odd, perhaps simply because now I would make them rather differently. But in a sense I think I *want* a little history included in my current work, so I’ll use part of the winter break for some scanning.