I think I did mention before that my girlfriend is a philosophy professor, and that was not a joke (this is how we first met 16 years ago: I was just reading *sort of* a philosophy book and asked her what she thought of it, and she gave me this very deadly look and said, “well, that’s something for the beach”, turned around, and walked away). Before she got into philosophy, however, she was an art student. Even earlier, she was employed by a number of small theaters, working in teams of artists who did the stage settings. Her task was painting—the large background paintings that you see behind everything else on the stage. Sometimes very abstract, sometimes courtyards, forests, and the like. When I first met her, several years later, she still didn’t own a single pair of Levi’s that was not entirely covered in paint. For this kind of painting—where things are measured in square feet—is rather hard work. 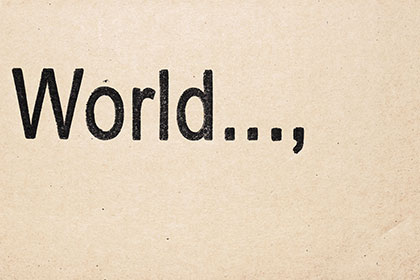 However, she had these very dark, if not to say deadly views about the people she was working with. Of all artists, she still firmly thinks, actors are the most hopelessly stupid. Not one of them who does not have a great agenda, and at the same time is willing to scratch the eyes of her colleague if she thinks the other one has the more flattering costume. But even her fellow-students at art school, which she was just about to begin after years of stage-painting, shocked her deeply. She was in London at the time, and two of her friends, riding an orange Volkswagen Beetle, decided to transfer to art school in Manchester, “to be closer to the toughness of life”. One of them was wearing a poncho, even in the midst of summer, and the message he had had something to do with explaining to the well-fed, bourgeois, presumably uneducated and feelingless person *how things are*. But in the eyes of my girlfriend, this guy—whom she liked a lot as a friend to hang out with—really did everything but know *how things are*. Indeed, he seemed so utterly ignorant to her that she simply couldn’t believe that *he* thought that he had something to say to the world. And it seemed to her that he was no exception. That, contrary to what she had expected, art was very much understood, by her fellow-students, as a medium by which one transports a message.

And after chewing on this for a while, she gave all her paintings away and dropped out of art school before even her first semester had fully started. In part, because she realized that there was not a single opinion of hers of which she felt certain enough that she would have dared to consider it her ‘message’. In part, because she felt that the ‘messages’ of the others were so hopelessly naïve and self-conceited that it killed her.

And then, she tells me, reading Plato’s Republic in her first semester as a philosophy student was a moment of revelation. It was all there! How the artists are by their very nature ignorant, but deem themselves wise. And how the messages they impose on people (for our culture tends to assume that they have something to say, so their messages are all over the place) are bad for the soul, because falsity is bad for the soul. And then there’s a whole Platonic dialogue on poetry, with a total idiot called Ion as the representative of the specific kind of presumed knowledge (i.e., ignorance) which is pervasive in that field. He makes a fool of himself claiming that he even knows how to run a war (does this remind you of something?), because the great thing about poetry is that it deals with everything! The poet as know-all, and as the laughing stock of those who see his total ignorance exposed by Socrates.

So now my girlfriend finds herself in a very strange camp. For, she tells me, everyone *hates* Plato for hating the artists. But, she consoles herself when she is in a psychoanalytic mood, would Plato have devoted so much time to the whole issue if he would not, deep in his heart, *love* art, as she herself does? And, ironically and perhaps not entirely incidentally, she is stuck with an artist… but one without a message (or with an anti-message message?), as I like to insist.