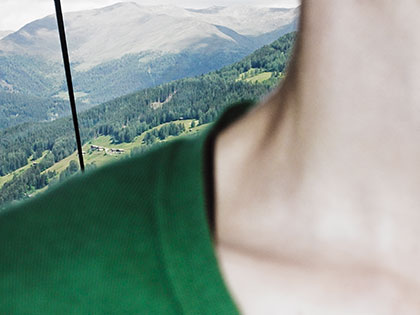 This from yesterday, from my way to work. I like it. (I’ll post a massive update of my Mountain Project in August: I’m pretty excited at this point, which does not happen that often; I only wish I still worked with film and the lab would do the rest of the work for me). I’m glad I’m not with Magnum – I’ve heard they have to schlepp their gear all by themselves (and only under a full moon), instead of using cable cars. But taking rides up the mountains is not my worst sin. Being in the Italian Dolomites, and thus ultimately in Italy, I have to face the tough choice between some of our favorite liberal (or postmodern, as if anybody cared) values: Respect for strange customs (the ‘otherness’ of the others), and the lovely innocence of ecological righteousness. Today I’ve been offered a tiny bird for dinner. Not the ones that are under protection and that international gourmets have banned from their plates, but still somewhat tinier than what I’m accustomed to; it was called “Stubenküken”, and friends who are entirely without feeling tell me it’s nothing but a small kind of chicken. But who can rest quietly and believe that! The bird was probably named “Marianne” by some sweet child that is now sobbing itself to sleep. But I’m in a haze. The beauty of the mountains up here is shocking – more on that in August.