The biggest difference between Germany and Manhattan? People in Manhattan are so much nicer! Although this may sound like a sweeping generalization (which of course it is), I think it is true. Every time I get to Manhattan, having spent time in Germany, I have to adjust. I have to try real hard to become some sort of a nice person again. 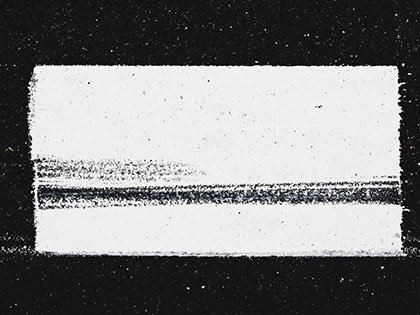 While shooting my Manhattan Project, I have never been approached in a nasty way. Not even once. Sometimes, of course, people are a little confused (why is he staring at the ground so intensely, taking shot after shot of a piece of asphalt?). Understandably, security personnel sometimes approached me after 9/11. However, when I show them what I am doing on the camera screen, they are usually awfully nice. Yes, they might scratch their heads. But they wish me a nice day, and walk away. One police officer even asked in which gallery I show the stuff, and wanted to see it there.

Yesterday, I took the above image, in a German suburb, on a sidewalk with a bicycle path. Admittedly, I stood on the path (!). So I hear someone approaching on his bike, yelling I should step out of his way. Of course I ignore that: The sidewalk was pretty wide with plenty of room. But the guy apparently wants to make a point and runs his bicycle straight into me.

It’s quite telling that I wasn’t even surprised, even though, from the perspective of Manhattan niceness, this seems pretty unbelievable. But, sadly, my German instincts are ready to resurface at the tip of a hat. I can be grumpy too! When the guy saw my stare, I think he sensed that he had made his point to the wrong person. However, I’m left with finding the whole story rather depressing. I would like to get to a point where I don’t even recognize this kind of behavior as what I’ve grown up with. Apparently, I’m not yet there…