In my last entry to Jens’ blog, I imparted a secret well kept by the upper class of Salzburg. And surely, we all need a piece of real cake on first returning to Europe. But we are also dying for the pleasures of getting lost in *summer* (this being a rather vague category, but I trust immediately intuitive to anyone who ever had a summer). For that, we need to travel south, preferably to a place which kills all activity prior to sunset. Say, Sicily. Here, I have a rather adventurous recommendation. 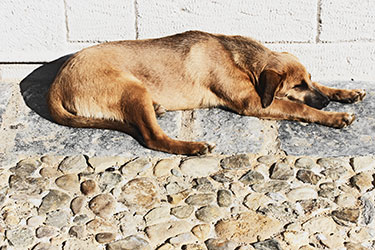 Starting late in the day (unfortunately, it is very hot once you get going), you go to Selinunte, an ancient site at the southwest coastline of Sicily. The remains of the Greek temples are located right at the edge of the Mediterranean Sea. For me, Selinunte is the most amazing archeological site on the entire island. The point is to get there just about early enough to still get into the excavation site, but late enough to make this, eventually, a dinner excursion.

Hot as it is, you can only visit the temples for so long. At the eastern side is a small barrier on the road that connects the temples, and from here you walk down to the beach. Now is the time to delay, and perhaps even swim for a bit. Finally, when you can plausibly claim that it’s evening, you walk further east, straight along the beach, until you get to a white-washed wall, behind which (or rather, on top, it is some sort of terrace) you’ll find one of the best (but nicely low-key) fish-restaurants of the island. I certainly don’t want to bore you with references to the Sicilian aristocracy, but this place has been recommended to me—in precisely the above fashion—by an actual prince, or ‘principe’, and it does live up to the recommendation!

All of it, that goes without saying, only works, and has the right kind of feel of total indulgence, if you walk all the way from the temples.