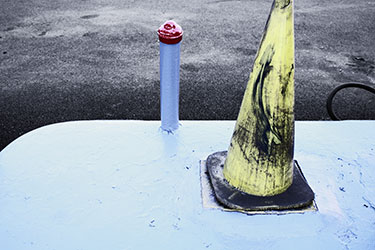 I sometimes wonder who reads artist statements. For those of us who, for better or worse, have already arrived in the current century, a look back on what happens when, well, Tiefenpsychologie goes a little too deep may be fun. The following excerpt from Sigmund Freud’s “The Interpretation Of Dreams” seemed like a perfect fit for my ongoing “What It Is Like To Be A Traffic Cone” series:

“A fragment from the dream of a young woman who suffered from agoraphobia as the result of her fear of temptation:

I am walking in the street in summer; I am wearing a straw hat of peculiar shape, the middle piece of which is bent upwards, while the side pieces hang downwards (here the description hesitates), and in such a fashion that one hangs lower than the other. I am cheerful and in a confident mood, and as I pass a number of young officers I think to myself: You can’t do anything to me. 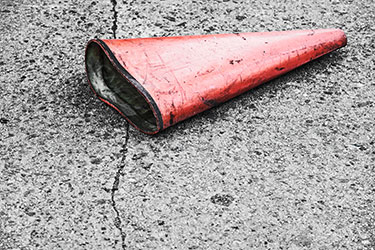 As she could produce no associations to the hat, I said to her: “The hat is really a male genital organ, with its raised middle piece and the two downward-hanging side pieces.” It is perhaps peculiar that her hat should be supposed to be a man, but after all one says: Unter die Haube kommen (to get under the cap) when we mean: to get married. I intentionally refrained from interpreting the details concerning the unequal dependence of the two side pieces, although the determination of just such details must point the way to the interpretation. I went on to say that if, therefore, she had a husband with such splendid genitals she would not have to fear the officers; that is, she would have nothing to wish from them, for it was essentially her temptation-phantasies which prevented her from going about unprotected and unaccompanied. This last explanation of her anxiety I had already been able to give her repeatedly on the basis of other material.”

Do not miss my movie “Traffic Cone Envy” on this subject, with an admirable performance of the song “Do It Again” by the ingenious Marilyn Monroe. 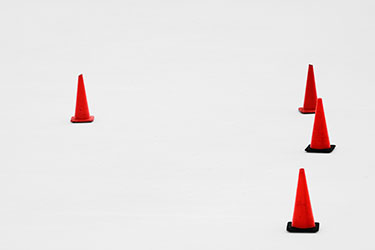