I’ve always regretted the fact that German journalists, compared to the Brits, just don’t seem to know how to tell a story. After former host of the German “Tagesschau”, Eva Herman, finally got fired the other week (see “Motherhood Crusader Goes Back To The Kitchen” here), most journalists who bothered to cover this story failed to provide the quote that actually led to the firing. That’s sad, since Herman’s quote, at least in my book, ranks as one of the most lucid things that have been said about the Third Reich, ever. Herman: “Many things in the Third Reich were really bad, for example Hitler” (but some things on the other hand, she continued, were really good). 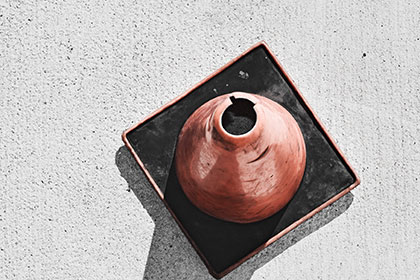 That is, I think, like saying “many things are really bad about contemporary photography, for example the photos.” I find this logic most refreshing and strongly intend to apply it to a number of future entries myself.

Speaking of Germania, 73-year-old Cardinal of Cologne, Joachim Meisner, has now turned into an art critic: “Modern art is at the risk of degenerating… when culture is disconnected from divine reverence, the cult descends into ritualism and culture degenerates. It loses its center”. Well, I couldn’t agree more. See here.

Back to my divine traffic cone project now.