First of all: I have given up film in 2002 and won’t go back. However, in a strange way, I like the fact that some people who had abandoned film for years now use medium format film again – it is an entirely different way of working compared to digital, and I think it often shows in a good way. Also, it seems that prices for used medium format cameras have gone so low now that it even makes economic sense to just get one on the side and shoot certain projects with film again. Anecdotal evidence from some of the larger photo stores in New York seems to suggest that there indeed is a spike in sales of that kind of used gear. 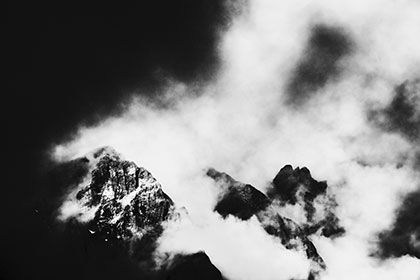 Here is my big regret about digital: I spend about 99 percent of my post processing time to make my digital files look as if they were shot with film. In the late 1990ies I did a lot of cross processing and I had a lab in Berlin that printed the negatives exactly the way I wanted (which of course involved going back and forth between my studio and my lab up to three times on a busy day – but mostly I kind of liked that). The above image is a good example that digital is not all about convenience. Ten years ago, I’d have made this kind of image with a film like Agfa Scala (I don’t even know whether that is still available), pushed to 800 ISO, printed on monochrome photo paper with a laser printer, and be done with it. Pushed Agfa Scala gave wonderful blacks, nice looking whites, and not much in between – just what I wanted.

I made the above photo with a Canon 5D this past July. Contrary to popular belief, digital cameras show a lot more detail in the shadows than film does. That is why digital files often look so dull. Technically this was actually a rather low contrast scene, making the problem worse. Hence I had to increase contrast by a huge margin to achieve a file that shows what I saw when I made the photo. Digital files only take that much manipulation before they fall apart, and in this case the file had pretty bad banding once I was done with the contrast adjustments. Well, there are Photoshop filters for that, but honestly it makes me feel like a complete idiot to spend half a day with adjusting contrast and removing digital artifacts when I could have achieved the same result in 1/500th of a second ten years ago.

Again, I don’t see myself going back to film. At least not until I’ll settle down in Switzerland or the Italian Alps. Traveling with unprocessed film after 2001 seems inconceivable to me, and in many ways digital suits my way of working (I don’t like “doctored” images and use my digital cameras and their displays to get the perfect frame on the scene to an extent that film did not allow). But I do miss the diversity of cameras that existed before digital flattened the camera world – and the spare time away from the computer…